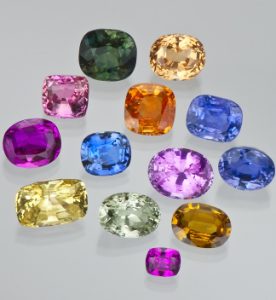 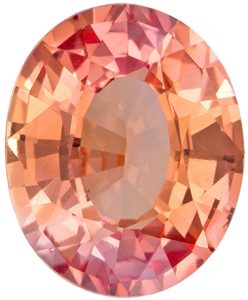 The sapphire, a member of the corundum mineral family, is traditionally thought of as a blue stone. However, sapphires come in every color of the rainbow: black, white, green, yellow/golden, purple, pink and perhaps the most exotic, a pinkish-orange called “Padparadscha.” There are rare, bicolor stones that exist as well. Trace elements are responsible for the stone’s different coloring. Interestingly, rubies/sapphires are one and the same, both from the mineral corundum. The difference between ruby and sapphire is that only rubies can be red, sapphires are pink. The boundary between rubies and sapphires is controversial.

Traditionally, the most valuable sapphires are a soft, velvety and vivid shade of “cornflower” or “Kashmir” blue. Most blue sapphires show inclusions or uneven color distribution. Sapphires that are ideal in color and nearly flawless are extremely rare, valued for their durability as they are the second hardest natural mineral. Like rubies, high quality natural blue sapphires show fine, hair-like inclusions.  In some of these the inclusions are so dense that a “star” effect is created, forming the very desirable star sapphire. Historically, blue sapphires have been considered as talismans of truth, authority, protection as well as healing.

Another very valuable and desired sapphire is the “Padparadscha” sapphire. In fact, true Padparadscha sapphire is much more rare and valuable than the blue sapphire. Named after the Sinhalese word for lotus blossom, they have a color that is in between pink and orange, a color seen in the lotus flower, and must be certified in order to be called Padparadscha. This sapphire is a symbol of purity, beauty, and enlightenment.