These are some of the many symbols Studio 22k incorporates into its unique jewelry, giving each piece extra meaning and significance to the wearer.

ASASE YE DURU is a symbol of the Ashante people of West Africa, meaning “the Earth has weight.” It is the symbol signifying providence and the divinity of Earth. This symbol represents the importance of the Earth in sustaining life. 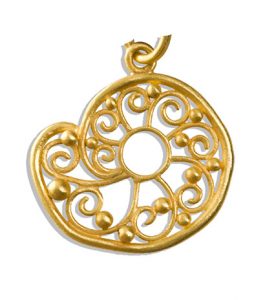 The Chambered Nautilus is a living fossil that has survived in earth’s oceans for the last 500 million years. Existing before there were fish, dinosaurs, or mammals, the Nautilus could grow up to six meters long and was a predator in the ancient seas.

The main feature of the Nautilus is the large snail-like shell that is coiled upwards and lined with mother-of-pearl. The shell is subdivided into as many as 30 chambers. As the shell grows, its body moves forward into the new larger chamber and produces a wall to seal off the older chambers. The empty chambers are used to regulate buoyancy. A cross-section of the shell of the Nautilus will show the cycles of its growth as a series of chambers arranged in a precise Golden Mean spiral.

The Golden Mean is represented by the Greek letter phi, (with the decimal representation of 1.6180…) is one of those mysterious natural numbers that seems to arise out of the basic structure of our cosmos. Phi appears regularly in the realm of things that grow and unfold in steps just as the Nautilus shell grows larger on each spiral by phi.

With each revolution completing a cycle of evolution, the Golden Mean Spiral is symbolic of life’s unfolding mysteries. The continuous curves of the spirals and the ratios between each of the chambers reveal the intimate relationship between the harmonics of nature and Sacred Geometry.

This symbol was designed as an alternative to the original symbol of the Raelian Movement, which was comprised of a hexagram intertwined with a right-facing swastika. Western sensitivities to the swastika led the Raelians to adopt this alternative in 1991, although they have since officially returned to the older symbol, believing that education was more effective than avoidance in dealing with such matters. For Raelians, this symbol means infinity. The hexagram is infinite space (one explanation indicates the upward pointing triangle represents the infinitely large, while the downward pointing one indicates the infinitely small), while the swastika or swirl in the center, is infinite time. Raelians believe that the universe’s existence is cyclical, with no beginning or end. 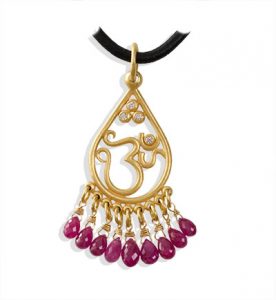 Om is the sound of cosmic vibration. It is a sacred sound, a spiritual icon and also a mantra in Dharmic religions like Hinduism, Buddhism and Jainism. When said, Om celebrates oneness with the entire cosmos. Om is comprised of four components of sound: A + U + M + “silence” symbolizing:

All states of time, the past, the present, the future, and that which transcends time

All states of Atman, these four states of Self/soul are seeking the physical, seeking inner thought, seeking the causes of spiritual consciousness, and the fourth state is realizing oneness with the Self, the Eternal

All states of consciousness wakeful, dream, deep sleep and the transcendental state of ekatma (being one with Self)

All states of knowledge, beyond the expanse of universe.

This is a slightly different design then the Hindu Om. This “om” represents the 3 gates, body, breath and mind the total perfection signifies and enables us to discover our true condition. 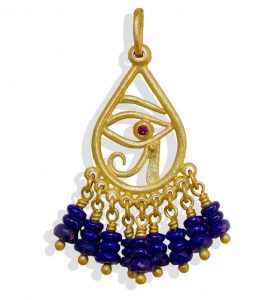 THE EYE OF HORUS

This is an ancient Egyptian symbol of protection, personal power and vibrant health.

The two eyes eventually became differentiated with the left eye (the “Eye of Horus” or the “Eye of Thoth”) often being regarded as the symbol of the moon and the right eye (the “Eye of Ra” or “Utchat”) being that of the sun. Together, both eyes represent the whole of the universe.

What is absolutely startling is the similarity of the eye of Horus to the pineal gland (also called the pineal body, epiphysis or the “third eye”). The pineal gland is a small endocrine gland. It produces melatonin, a hormone that affects the modulation of wake/sleep patterns and photoperiodic (seasonal) functions. It is located near to the center of the brain between the two hemispheres, tucked in a groove where the two rounded thalamic bodies join. Unlike much of the rest of the brain, the pineal gland is not isolated from the body by the blood-brain barrier system. It is reddish-gray and about the size of a pea (8 mm in humans). 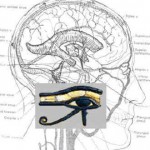 The physiological function of the pineal gland has been unknown until recent times. Mystical traditions and esoteric schools have long known this area in the middle of the brain to be the connecting link between the physical and spiritual worlds.

Development of psychic talents has been closely associated with this organ of higher vision.
The third eye controls the various bio-rhythms of the body. It works in harmony with the hypothalamus gland which directs the body’s thirst, hunger, sexual desire and the biological clock that determines our aging process. When it “awakens”, one feels a pressure at the base of the brain. Etymologically, the goddess can be traced back to the Egyptian “iaret,” meaning “risen one” depicted as the image of a cobra rising up. The image of Utchat as a rising cobra can be likened to the female kundalini energy of Vedic origins.

Wearing the Eye of Horus amulet is believed to have healing and protective powers as well as enhance the ability to see with clarity and truthfulness. Considering that it depicts our pineal gland, it goes beyond the ordinary, allowing us to “see” from the higher consciousness and connectivity associated with our third eye.

This is a symbol of omniscience. Egyptian symbol of the eye within the pyramid originally representing the god enclosed waiting to be reborn, entombed in the underworld “Seker” Lord of death with open eyes, remaining alive and watchful.  Other interpretations suggest The eye of God watching over mankind. The all seeing eye watching over mankind. 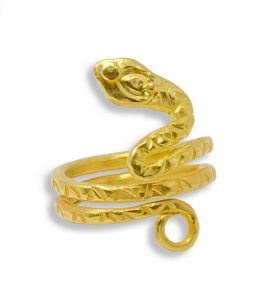 One of the oldest symbols found in various civilizations. Pre-classic Aegean civilization considered the snake as ultimately a feminine symbol that represented the power of life. Snakes represented immortality as they were able to shed old skin and generate new skin.

In India, the mother of all that moves was the female serpent “Kundalini.” inner power of the human body. Also in India the goddess of the earth is sometimes known as “Sarparajni” serpent queen.

One of the African symbols of the snake is meant to depict the messenger spirit.

This is the Latin/Greek symbol representing the opposing forces of death and regeneration. It is the Caduceus that Hermes, the messenger of the gods in the Greek pantheon, carried. It is also associated with Asclepius, the healer.

The Snake eating it’s own tail. Ouroboros is associated with Alchemy, Gnosticism and Hermeticism. It represents the cyclical nature of things, eternal return, and other things perceived as cycles that begin anew as soon as they end. The Ouroborus can be found in many different cultures. From ancient Egypt, circa 1600 B.C.E., the symbol passed to Phoenicia and then to the Greeks who gave the snake the name “Ouroboros,” meaning the tail-devourer. In Norse mythology, the serpent Jormungand, one of the 3 children of the trickster Loki, grew so large that it could encircle the world and grasp its tail in its teeth. In Hindu mythology, it is the dragon circling the tortoise which supports the four elephants that carry the world. It refers to and represents the cyclical nature of things, eternal return, the dual nature of all things, creation out of destruction, life out of death, totality, and infinity.

The Babylonian 8 pointed star is “Ischtar’s Star,” meaning the star of the queen of the heavens, the goddess of childbirth, fertility and sexual pleasure.

The Sumerian goddess Inanna is also represented by the 8 pointed star. She was a goddess associated with the moon, the planet Venus, the serpent, as well as sexuality and fertility.

Associated with water, power, independent movement and outgoing migration. Basic spirals were found drawn on prehistoric cave walls, and it is a common design motif found on discs from Crete (c. 2000 BC) as well as in Tibet. It is a symbol for potential power.

This sign appeared as early as 2000 BC as an Egyptian hieroglyphic. This spiral represents thread or measurement. It is also found in Chinese ideography and Hopi Indian lore to mean return or homecoming.

Between 600 and 400 B.C. the lyre and the flower were the attributes of Eros, the god of sexual love.

TRIANGLE WITHIN A CIRCLE

Represents the elements in an alchemical context and as a symbol for the Christian idea of three-in-one, the Holy Trinity

Typically, the central circle is inscribed with the seal of the spirit or property to be invoked. The usual form is of a triangle, circumscribed with various words of power, containing an inner, blackened circle. The purpose of the triangle is to contain the manifested entity. In some cases, the triangle is created as a physical object; sometimes, the central circle is replaced with a black scrying mirror.

An Adinkira print symbol on clothing from Ghana, Nyame dua means holy place. Nyame dua is also drawn which is identical to an old Swedish peasant design from Östergötland from the eighteenth century. This sign was a common structure in antiquity in both Greece and Byzantium. It is a common design in Nordic and other countries’ peasant art from the Middle Ages.

The point where the moon cuts the ecliptic from south to north is known as the moon’s north node or caput draconis, the dragon’s head. The north node was drawn in a Greek natal chart more than 2,000 years ago.
According to astrology in a natal chart is a symbol for gifts.

According to astrology the south node in the natal chart is associated with sacrifices and efforts that life demands without giving anything in return. Both the north and south nodes are associated with blood ties and sexual contacts that lead to childbirth

Egyptian symbol was originally a personification of the Milky Way, which was seen as the milk that flowed from the udders of a heavenly cow.

According to a German source, this is an alchemical sign for aurum, or gold. The sun sign is the most common of the alchemists’ many signs for gold. This symbol was also found carved into a rock face in the Altaj mountains in Siberia. 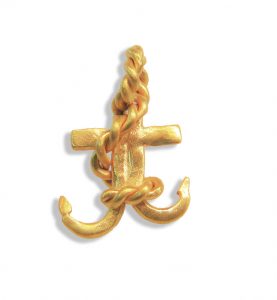 Used by the ancient Romans to symbolize steadfastness. In ancient Hebrew, it is referred to as “the anchor of our soul.” It can also infer and represent a goal either attained or to be attained.

“Love of my life”