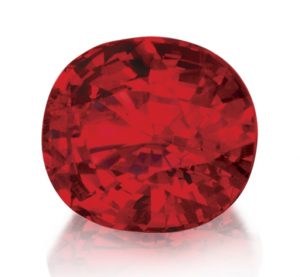 Rubies are some of the most valuable gemstones on the planet, are consequently highly sought after and rarer then colorless diamonds.

Ruby and Sapphires are both from the mineral corundum are in fact are one in the same. The term Ruby is used only when a sapphire is a deep red color. All other variations of red and pink are referred to as pink sapphires. Sapphires come in a variety of colors.

Location or provenance of a Ruby’s origin is particularly important since stones of certain locations have the notoriety of being of a certain color. “Burmese” Ruby is thought of as pigeon blood color or crimson red.  “Burmese” now known as Myanmar is perceived to be of much higher value than that of other locations.  One of the most famous mines is located in Mogok, Myanmar. A ruby is more valuable the purer the red without the undue influence of purple or brown.  Clarity and size of the gem is also very important to determine the market value although inclusions (imperfections) of a stone sometimes help to determine the authenticity. Pinker-hued gemstones usually come from Thailand, Afghanistan, Northern Pakistan, Cambodia; Southwestern Sri Lanka (Ceylon), Vietnam and the US.

Star Ruby is rare and collectible. Although often a ruby with a star is milky in complexion.  Depth and transparency are additional qualifications on determining the value of a star Ruby.

The word Ruby comes from the Latin “ruber”, meaning red. Through history, various cultures have
considered rubies to be a symbol of wealth, power, and passion. They have been considered talismans of spirituality, wisdom, protection from misfortune and illness, and triumph in love.

In India, ruby crystals are said to be pieces from the spear of Lord Krishna. Its crystals are known as the ‘star of purity’ and ‘star of fire’. It is said to initiate action and focus, energies necessary for healing the Earth. Ruby’s red glow comes from an internal flame that cannot be extinguished, making it a symbol of everlasting love. In Sanskrit, rubies are called “Ratnaraj”, which translates as “King of Gemstones.”

Burmese warriors of ancient history were said to have inserted rubies into their flesh in order to imbued themselves with invincibility.

Rubies are spoken of in The Old Testament. In several references Ruby was chosen to represent one of the twelve tribes of Israel during Exodus and was worn on the breastplate of Jewish High Priests.