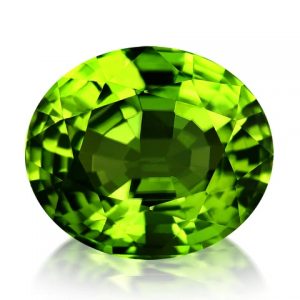 Peridot is a member of the mineral Olivine family.

Glistening green Peridot is a volcanic gem formed in the deep fires of the earth. On Hawaii, it is treasured as the tears of the tempestuous Pele, goddess of the volcano, with all her power and capriciousness. In ancient Hawaiian chants, she was described as “she-who-shapes-the-sacred-island” and her temper was known to be both as abundant and dangerous as the lava. In fact, volcanoes emitting lava sometimes explosively hurl Peridot rich “bombs.”

The word “peridot” is derived from the French peritot, “gold,” because Olivine can vary from green to gold (although we classify true gold or yellow Olivine as chrysolite). The most commonly found Peridot are leaf or bottle glass green and are often mistaken for emeralds.

3500 years ago, Peridot was mined in Zagbargad, an island in the Red Sea now called St John’s Island.  Modern and ancient Egyptians revered the Peridot stone they called “the gem of the sun,” going so far as to name it the National stone of Egypt. In fact, historians have questioned whether it was actually Peridot and not emeralds that Cleopatra was reputedly so fond of wearing.

Hawaii’s volcanoes have produced some Peridot large enough to be cut into gemstones, but virtually all Peridot sold in Hawaii today is from mainland United States. Today most Peridot is mined, often by hand, by Native Americans on the San Carlos Reservation in Arizona. Peridot found here is beautiful in color but relatively small in size. Faceted Peridot from Arizona is rare in sizes above 5 carats. To find large Peridot, one must look for those coming out of Burma. Peridot is also found in China, Pakistan, Afghanistan.

Because it is associated with the sun and fire, Peridot has been prized since the earliest civilizations for its protective powers to drive away forces of darkness. It can calm anger, alleviate emotional burdens and increase abundance in all areas of life.