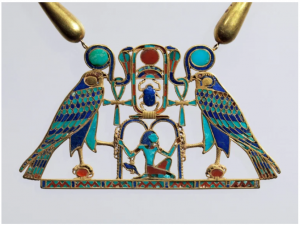 Turquoise, lapis lazuli, and carnelian are one of the most famous gem combinations. Starting in the 4th Dynasty, during the reign of Khufu and continuing for the next two millennia, the trio was often found together in ancient Egyptian royal jewelry.

Lapis and turquoise were, at that time, both extremely rare and costly, though carnelian—obtainable without laborious extraction at several sites— was not. Semi-transparent and ranging in color from yellow orange to red to reddish brown, carnelian is a form of chalcedony, which is a microcrystalline form of quartz.

Perhaps due to its red color, its source locations in the eastern desert, and the fact that Egypt at that time was known to have a religion based on sun worship, carnelian was prized over other, similarly colored stones such as red jasper. The goddess Isis protected the dead with a Carnelian Amulet she named Thet.

The trio of carnelian, lapis, and turquoise likely had special significance. Scholars think it partly an act of balance of the colors and the stones’ associated properties and powers, which were significant. Turquoise’s calming green color balances the fiery red power and heat of the carnelian, and the nourishing blue of the lapis enhances the other two.

Lapis, also known to the ancient Egyptians as the “heaven’s stone,” was especially prized by Cleopatra VII. She was known to (in addition to wearing it) ground it into a powder to be used as eyeshadow. Lapis is technically a rock as it is an aggregate of more than one mineral, but can be cut and polished like any other precious gemstone.