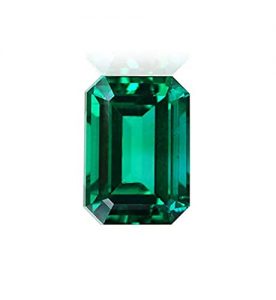 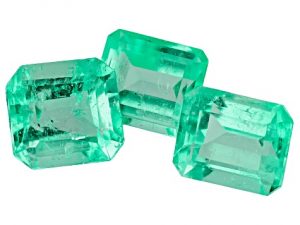 The emerald has been one of the most sought after stones for thousands of years.

The Emerald is called the garden stone. The name comes from the French word “Jardin,” which means garden. Emeralds contain inclusions (blemishes) that make the stone appear mossy and garden-like, a quality that is valued. Emeralds with no eye-visible inclusions are extraordinarily rare and very valuable. This combined with the intensity of color is seldom found in nature. Manmade stones and treatments to natural stones, such as heat, color filling and radiation can mimic a natural, flawless stone. In 1935 synthesized (man-made) emeralds found their way onto the world market, distinguishable from natural emeralds on the basis of their lack of inclusions.

The Emerald comes from the mineral called Beryl. Beryl comes in a variety of hues (green, blue, pink, yellow), but only the bright green stones containing trace elements of chromium, vanadium and iron and are considered emeralds.

There are different types of emeralds. Only the rich intense green beryl with traces of chromium are considered to be fine gems.

Trapiche emerald, containing a majority of the element chromium. Chromium-based emeralds are a fine, high value stone second only to the Trapiche emerald. As the Trapiche emerald forms, black carbon impurities fill at the crystal junction which forms a radial pattern with a six-pointed star effect.  This stone is becoming more valuable and harder to find without inclusions.

Found only in Colombia at Coscuez, La Peña and the celebrated Muzo mining district, these are perhaps the rarest and unusual of “pattern” gems.

TRAPICHE is the result of the growth of an Emerald Crystal with darkened impurity of lutite. As the Crystal grows in its normal six-sided shape, the darker lutite is pushed to the center of the Crystal and then radiates out in the six directions of the corners of the Crystal. Six spoke-like carbon “rays” emanating from a hexagonal center with the areas in between filled with lively emerald green.

Vanadium-based emeralds are lower grade emeralds often used in conjunction with Vedic astrology, healing and in jewelry of lesser value.

The emerald has been revered by humanity since antiquity. The first known emerald mines were in Egypt, dating from approximately 330BC. Cleopatra was known to have a passion for emeralds and used them in her royal adornments. Legend endows the wearer of an emerald with the ability to foresee the future when the stone was placed under the tongue, as well as providing protection against evil spells. Roman Emperor Nero (d. 68 AD) was said to have a large emerald through which he viewed the gladiator games.

On a metaphysical level, the emerald is known as the “stone of successful love”.  It is said to provide for domestic bliss and instill both sensitivity and loyalty within the self and others. Emeralds are also used to enhance memory and stimulate greater mental capacity. In addition, it can be used to open, activate and stimulate the heart chakra while also helping to quiet emotions.