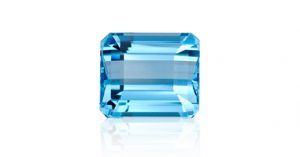 Aquamarine, from the Latin word aqua (water) and mare (sea), literally means “water of the sea.

Aquamarine is a member of the mineral Beryl along with Emerald, Morganite, Goshenite and Heliodor. The highest quality gem is based on color, clarity, transparency and lack of inclusions or flaws. The deeper and richer the color, ranging from pale blue to blue-green and teal, the more valuable the crystal.  Many aquamarine crystals are heat treated to enrich the color, therefore a natural colored stone is more valuable than a heattreated stone.

Cat’s eye aquamarine is a variety of green-blue beryl which exhibits a rare phenomenon known as chatoyancy. Chatoyancy is an optical trait distinguished by a unique reflection of light that resembles the slit-eye of a cat. The cat’s eye reflection is caused by light reflected off parallel inclusions, typically rutile needles, fibers or channels. This phenomenon is exceptionally rare and occurs only in a handful of different gems, including chrysoberyl, apatite, moonstone and tourmaline.

Unlike other crystals, Aquamarine can be found in very large crystal formations. The largest, faceted, high-quality crystal was found in Stoneham, Maine, North America. It weighed in at almost at 137ct. Most aquamarines come from Brazil.  They are also found in Africa, China, Pakistan’s Karkoram mountains and in several locations across the United States.

Pliny the Elder (Roman, d. 79 AD) wrote that aquamarine came from the treasure chests of mermaids. Aquamarine is said to calm seas and amulets engraved with the image of Poseidon were thought to keep sailors safe.

Aquamarine is associated with Kuan-Yin, the Chinese Goddess of mercy and compassion.

During the Middle Ages in Europe, it was considered to be an “oracle” crystal, associated with clarity, divination, crystal balls, and prophecy. In the late 1300’s, Aquamarine was used as an antidote to poison; the person only had to wear the stone to be protected. Among many other benefits, it was also believed to relieve pain, quicken the intellect, grant good manners, throw off one’s enemies, and—perhaps the best benefit—it was thought to offer everlasting youth.