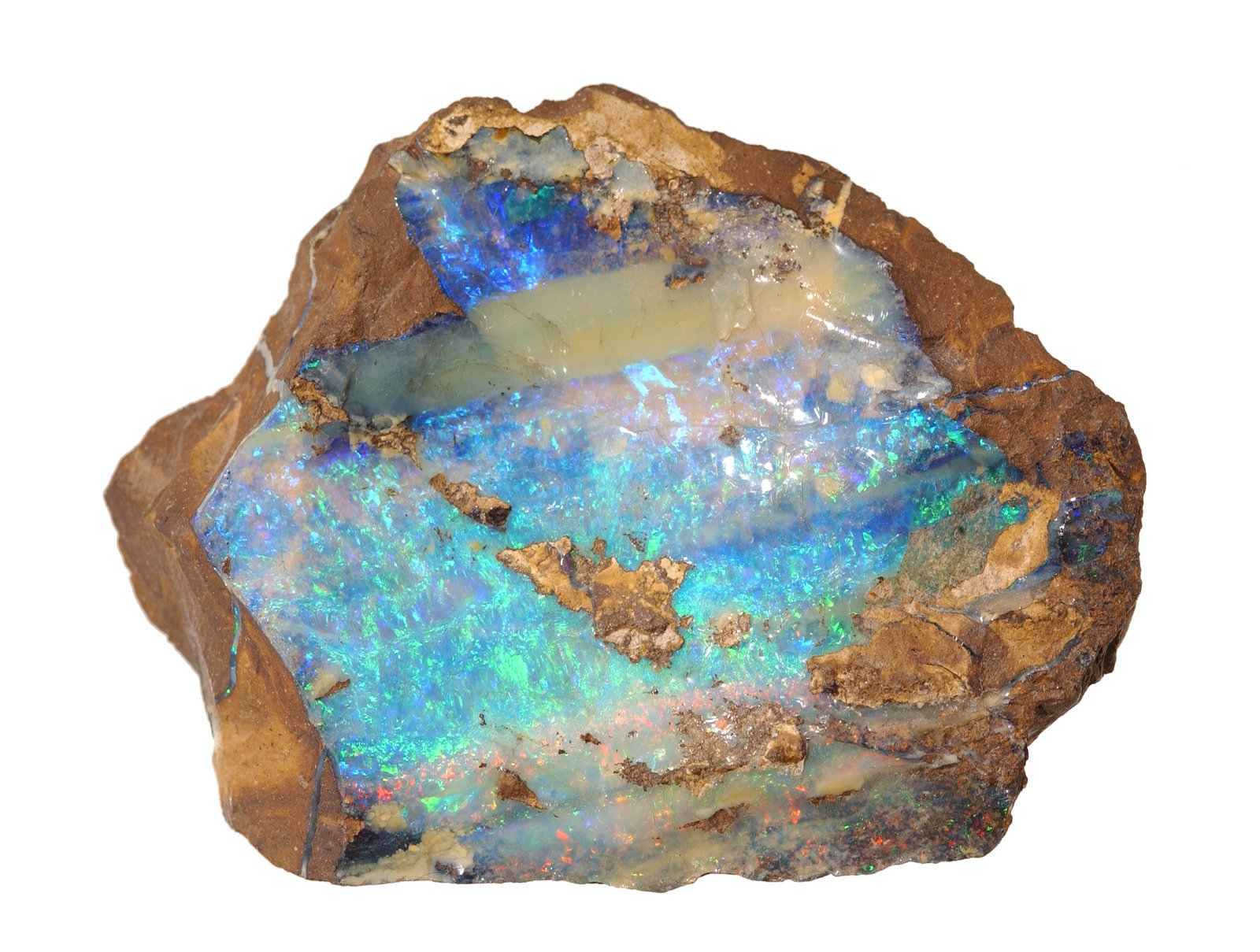 The name opal derives from the Greek Opallos, meaning “to see a change (of color)” and from the ancient Sanskrit Upala meaning precious stone. There are many different varieties of opals: Mexican red fiery opals, European and Czechoslovakian white opals and several from Australia including red, blue, green and black.

In 1987, a miner working in the opal-rich town of Coober Pedy, Australia, stumbled across the opal-covered fossil of a pliosaur within a mine. During the fossilization process, opalization occurred, leaving the seven foot long dinosaur fossil with a semi-precious, opalescent sheen. Opalized fossils are formed mainly in white opal. Paleontologists and gem dealers often struggle over who should get the opalized Cretaceous marine reptiles and dinosaurs found in Australia.

Opals are hard, hydrated silica. The process of precious opal formation is not entirely clear. It is thought that opal starts out as a concentrated silica gel that accumulates in cavities and spaces within a host rock, eventually hardening into gemstones.  Because of their high water content, opals are prone to cracking. In fact, opalescence, the iridescent “play of color” characteristic of this stone, is the result of light reflecting off of the tiny spherules which reflect different wavelengths of light. White, yellow, blue and green are the most common colors seen through play of color, whereas violet, fiery red and orange are the most valuable and sought after of opal colors. Opals are opaque to transparent with a soft waxy luster. They are very delicate and should only be cleaned by wiping with a soft cloth.

The Opal’s reputed positive qualities were held until 1829 when Sir Walter Scott wrote his bestselling novel, Anne of Geuerstein. In the story, a lady who was accused of being a demon wore an opal in her hair. It flashed fiery red when she was angry and sparkled beautifully when she was happy. She dies after holy water accidentally falls on the opal and destroys its color. This story caused the opal market to crash until 1877 when the discovery of an amazing black opal was found on Lightening Ridge.

Opals are stones of inspiration which enhance imagination and creativity. They can bring inspiration to projects and to life and Spirit. Its own spirit is at times like that of a child, spontaneously playing, dashing color where ever it pleases. Historically, the opal symbolized fidelity, assurance and hope. In Rome, Caesars gave their wives opals for good luck as carrying opals was believed to bring good fortune. This precious gem was said to be included in the crown of the Holy Roman Emperor.

As mentioned, there are many different types of opals. The main commercial varieties are:

White Opal / Contra-Luz Opal: transparent to semitransparent, shows play of color best when light is reflected through it.

Hydrophane Opal: only develops play of color when immersed in liquid.

Fire Opal: transparent to translucent opals with warm body colors of yellow, orange, orange-yellow or red. They do not usually show any play of color, although occasionally a stone will exhibit bright green flashes. The most famous source of fire opals is the state of Queretaro in Mexico; these are commonly referred to as Mexican Fire Opals. Fire opals are also found in Central America, South America and the United States (Idaho and Oregon).

Pineapple Opal: also called Opal Pseudomorphs. These are a rare form of opal only found at White Cliffs, New South Wales and are created by opal deposits in various fossils. Many of these fossilized forms contain an exceptional quality of noble opal.

Boulder Opal: This type, composed of opal naturally occurring on its host rock, is mined predominately in Queensland, Australia. It is easily identified because when cut the host (brown ironstone) is left on the back of the opal.

Black Opal: This opal is by far the most valuable and appreciated of all opal varieties. Almost all black opals are mined from Northern New South Wales and the majority of these are specifically from Lightening Ridge. Despite the name, black opals can encompass a variety colors, top specimens reflecting the full spectrum of color against a dark gray to black background.