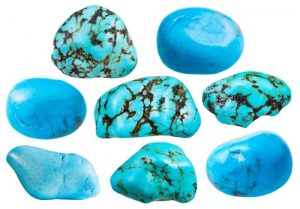 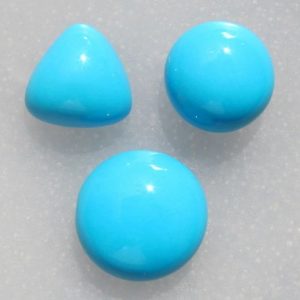 Turquoise is a hydrated phosphate of copper and aluminum. Turquoise is found in dry, barren regions where acidic, copper-rich groundwater seeps downward and reacts with minerals creating an aggregate of crystals that form a solid mass. One of the world’s most ancient gems, valuable turquoise is hard with a waxy luster that made it popular with Chinese artisans to carve with more than 3,000 years ago. Turquoise was also important to the ancient Egyptian empire and is recognized as the national gem of Tibet. Although considered a semi-precious stone, in recent years turquoise has become increasingly expensive and rare.

Turquoise from the Sleeping Beauty mine in Globe, Arizona produced the most sought after stones. Sleeping Beauty Turquoise is revered and highly sought after due to its pure sky blue color which shows very little to no veining or webbing. Sadly, the mine that supplied copper and turquoise for 40 years shut down turquoise production in August 2012, contributing to the stone’s sky-rocketing prices. Turquoise is also mined in other spots in the U.S., Mexico, Iran, Chile, China and Tibet.

Turquoise has a rich history. Montezuma, thinking Cortez was the favored god Quetzalcoatl, gifted him that god’s favorite gem, turquoise. Beyond being a favored gem, turquoise was a medium of exchange and an important ceremonial gem for many Native American tribes. In fact, Apaches believed that turquoise attached to a bow or firearm increased accuracy. In general, it is thought that turquoise guarantees health, good fortune and protection from evil.