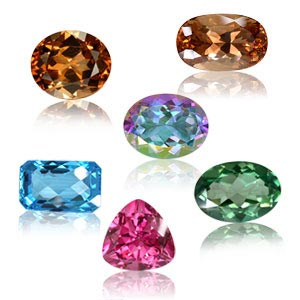 Topaz, the traditional birthstone for November, is a silicate mineral comprised of aluminum and fluorine. Topaz comes in a wide spectrum of colors, the different colors resulting from the proportion of different elements present. The most common topaz is fluorine-rich ranging from colorless to aquamarine blue. In fact, the blue topaz has become a popular replacement for the more expensive aquamarine. However, few retailers know or admit that the “aquamarine” topaz owes its color to irradiation, making the gem less a product of nature and more a product of the laboratory.

Historically, Imperial Topaz mined in Brazil was the rarest and most expensive variety of topaz. It is a golden-yellow, hydroxyl rich variety also called Sherry Topaz. Citrine quartz (November’s modern birthstone) and yellow sapphire are so frequently substituted for Imperial Topaz that it is

assumed to be more common than it is.

Today, natural pink topaz are the most rare and expensive stones in the topaz family. Pakistan is producing all-natural purplish-red stones that are unique in color and intensity. These stones are far more valuable than their Brazilian counterparts. In 1750 a Parisian jeweler discovered that yellow, Brazilian topaz turns pink with exposure to moderate heat. Unfortunately, Imperial Topaz are so expensive that it doesn’t pay to heat them.

For thousands of years the mere mention of Topaz has conjured thoughts of opulence and luxury, influence and generosity, vibrancy and strength. To possess one brings true love, fidelity, friendship and a gentle nature, bestowing the gifts of courage, wisdom and success in all endeavors. Its energy, harnessed from the sun, transcends both time and space and is one of the most loving , beneficial crystals one can gift to the self.