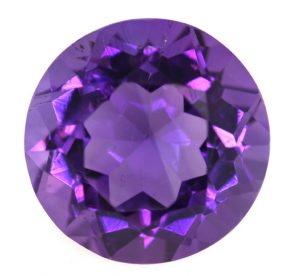 Amethyst, known as the gemstone of virtue and piety, is found in most countries where granite rocks are exposed. Amethyst occurs in alluvial (left by rivers, floods) deposits and geodes. It has been a highly revered gemstone throughout the ages, mined in such countries as Russia, Mexico, Sri Lanka, Zambia, Madagascar, and somewhat in the United States. Amethyst held its value until the mid 19th century when vast deposits were found in Brazil, collapsing the market.

Amethyst’s color ranges from mauve to deep purple, the most desirable being called “deep Siberian” which is an intense violet with traces of blue and red. The coloration of an amethyst specimen is dependent on iron traces within the gem. Purple amethyst has been highly esteemed throughout the ages for its stunning beauty and legendary powers to stimulate, and soothe, the mind and emotions. It is a semi-precious stone in today’s classifications, but to the ancients it was a “gem of fire,” a precious stone worth, at times in history, as much as a diamond.

The word amethyst is derived from the Greek word “amethustos” meaning “not intoxicated.” The ancient Greeks believed that drinking wine from a cup made of or adorned with amethyst would make them immune to intoxication. Similarly, the early Christian church also believed the amethyst to have sobering properties. In fact, the stone was adopted as the symbol of the high spiritual state its bishops were expected to attain, eventually becoming part of a bishop’s regalia.

In today’s world, amethyst is still a remarkable stone of spirituality and contentment, known for its metaphysical abilities to still the mind and inspire an enhanced meditative state. Its inherent high frequency purifies the aura of any negative energy or attachments, and creates a protective shield of light around the body, allowing one to remain clear and centered while opening to spiritual direction. Amethyst stimulates the third eye, crown and etheric chakras enhancing cognitive perception as well as accelerating the development of intuitive and psychic ability.