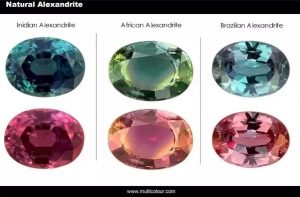 “Emerald by day, Ruby by night”

Alexandrite, a member of the Chrysoberyl family, is one of the rarest and most famous color changing gems in the world. A beryllium aluminum oxide, Chrysoberyl is hard and durable, surpassed only by sapphires and diamonds. The largest, found in Russia weighs 66 carats, while the largest Alexandrite ever found is only 10 carats.

Alexandrite was discovered in Russia in the Ural mountains in the 183o’s and was named after the young Alexander II, the heir apparent to the throne. It become the national stone of Russia due to the fact that its colors, green and red, are also the colors of the Old Imperial Russian military.

Alexandrite is strongly pleochroic, meaning it shows different colors in different types of light. The most valuable stones are emerald green in daylight, changing to a raspberry red in incandescent or candlelight. The stronger the color change, the more valuable the stone.

The best quality of Alexandrite is thought to come from Russia, however Sri Lanka and Brazil are also known for fine examples of this gem stone. It can also be found in Tanzania, India, Myanmar, Madagascar and Zimbabwe, though the color-change property of these stones tends to be less dramatic and the change is from green to purple rather then red.

Alexandrite is said to bring balance in the interaction between the physical manifest world and the unmanifest spiritual (astral) world. Alexandrite opens the crown chakra and brings love, fortune, hope, and luck to those who wear it. Often it is thought to bring joy to those with too much self-discipline and reminds its wearer of their soul’s purpose.

In Asia, Chrysoberyl has been known for thousands of years and is used to protect against “the evil eye.” A cloudy, more opalescent variety is sometimes referred to as Cat’s eye. Some of the finest cut Cat’s eye are as valuable as sapphires. Hindus once believed that cat’s eye provided assurance against poverty.